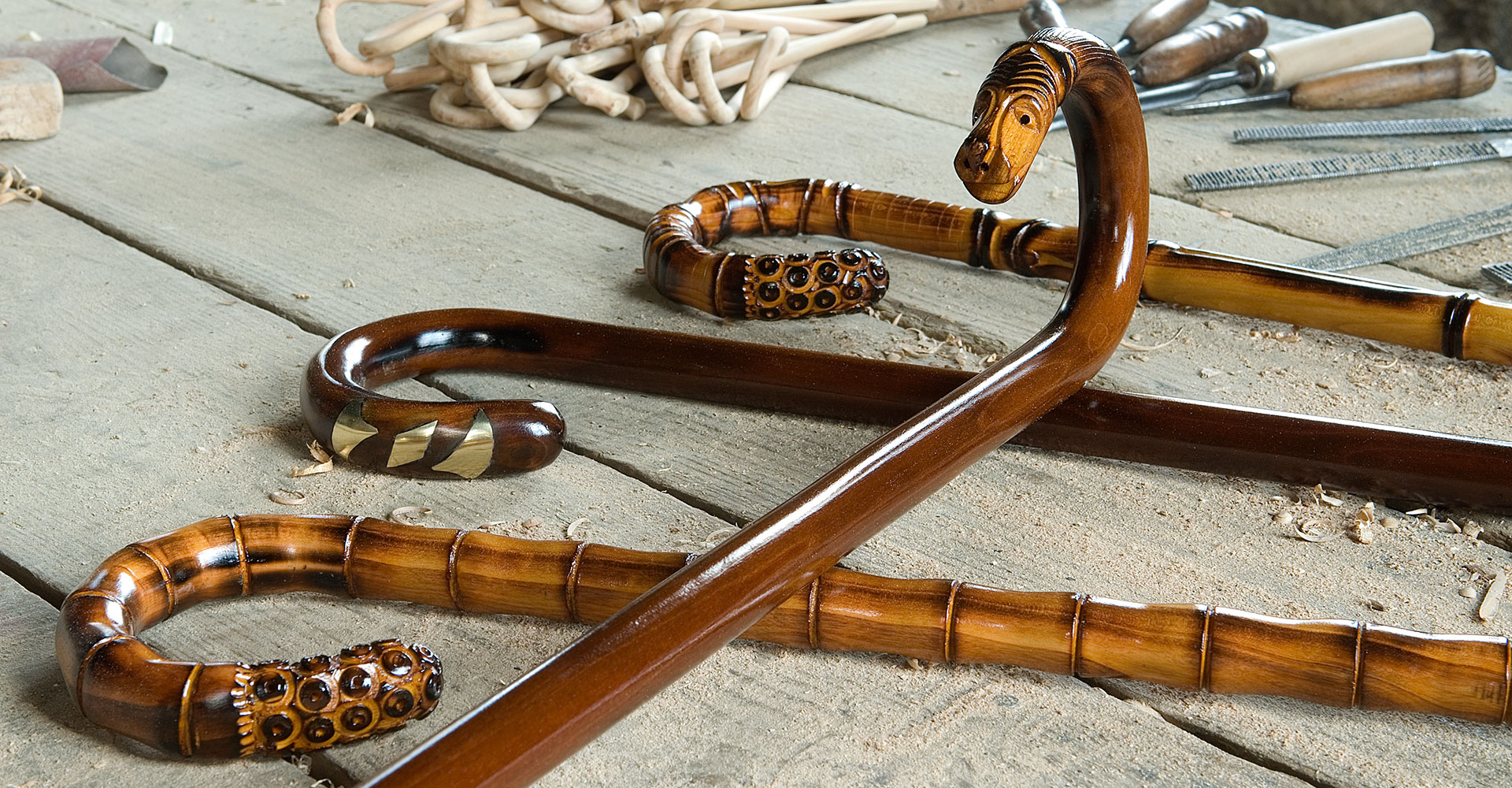 Famous for their original folding technique and for their decoration, Gestaçô canes are also well known to university students, since thousands of canes come out annually to the “Doctors” of the burners of the tapes from all over the world. parents.

The collection of umbrella castles, offered to the Municipality of Baião, was owned by Mr. Silvério Pereira Ferraz and was exhibited, for the first time, at the CMB Handicraft Center, in 1983. Silvério Ferraz was, like his father, Belmiro Ferraz, a great craftsman, having made a notable contribution to the dissemination of this craft, which justified the attribution of a medal of cultural merit, by the Municipality of Baião in the 80s. Silvério Ferraz and Belmiro Ferraz have, respectively, in the person of his nephew and grandson, Eduardo Cardoso, a continuator of his art.

The first cane workshops appeared in Gestaçô at the end of the century. XIX.

The great impetus for the trade was Alexandre Pinto Ribeiro, who in 1902 installed his first workshop in the place of Mó, a dream that he had cherished since he had returned from Africa in 1888.

During the visit to an exhibition fair in Madrid, Alexandre Pinto Ribeiro, verified a different folding technique than the one used, and on the cuffs of his shirt he designed the patterns. In Portugal, he orders these molds to be made of cast iron and with this new technological innovation, this man revolutionized the whole process of making canes and umbrella handles.

The change from a cutting to a folding technique not only allowed for a more economic use of wood and made it less fragile, but also brought significant changes to the way of life of large part of the population, as the number of workshops increased as did the orders from the umbrella factories in the country, namely Porto, S. João da Madeira and Braga.

When the walking-cane fell out of use as an accessory to male attire, the workshops of walking-canes started facing difficulties in surviving, closing their doors when the factories started disregarding the umbrella handles made of wood and using plastics and synthetic fibres instead.

Today, the artisans’ survival is achieved through their creativity, showcasing unique pieces that delight collectors, such as the walking-canes with animal heads, the miniatures and the puppets.

For the simplest and most popular models, European nettle tree is mostly used, though cork, quince and oak wood are also used. Cherry tree, apple tree and chestnut are used for the “prime” models, as they are not only more abundant, but also more adequate for technical experimentation.
The wood is bought by the tree, cut in the sawmill into planks of 1.5 cm thickness and stacked in the workshop to dry in the shade. Once dry, the planks are marked with a ruler and pencil to outline the lengths that will be formed into handles or walking-canes. When making umbrella knobs, lengths of 44 cm were cut. The lengths of 122 cm were reserved for the walking-canes. Nowadays, the wood is cut by a semi-industrial machine, which replaced the Biscaia saw and the wood handsaw.

Preparation of the wood

The wood lengths, which are made into walking-canes, are boiled in old three-legged iron pots on the continuously lit fireplace. The end of the wood (which will be bend) is submerged in boiling water to become adaptable, thus diminishing the risk of a broken cane top.
The moulds in cast iron are also placed directly in the flames, as they must undergo high temperatures to be used in the folding process.

This manufacturing phase of the walking-canes is indeed the most intriguing one due to its ingenuity. It consists of folding the tips of the wooden lengths softened in the boiling water with a metal bar (like in the hoop game), which is overlaid so as not to crack it during folding. This metal sheet is fixed with hoops and a screw. This process is performed around two cast iron moulds on the embers, using an iron spindle, which burns the cells on the inside of the wood to keep the curved shape (crosier).
The walking-cane is removed from this bending bench, keeping one of the moulds on the inside and the metal plate and one of the hoops on the outside. A clamp is attached to tighten the curvature. This step allows for the water to dry and the wood to tighten slightly more, so the walking-cane stays closed for good.

After the folding process, the artisan starts the thinning of the crosier. In order to give the walking-cane its shape, the artisan uses first a chisel and a coarse file to remove the square parts, leaving the walking-cane completely polished. This whole process is carried out on his work bench with the use of a vice, into which he fastens a small wooden part, made by himself, for a better fixture of the cane.
Using a chip ax, planer and chisel, the first layer is “thinned” on the longer end of the walking-cane (stem), which confers a circular shape to the wood strip. Nowadays, the rounding of the square section is done by using mechanical tools.

The decoration of the walking-canes is rich and varied, following the imagination and creativity of the artisan rather than standardised models. However, and though there are not two walking-canes, which look the same, they can be categorised by type, whith each one following a certain manufacturing process.
The most characteristic decorative features are the “knots” and “grooves”, shaped with files and an array of gouges with different types of tips, used according to the type of engraving to be created.
A can full of alcohol and a thin copper pipe with a curved tip are used to darken the “knots”. By blowing gently, the curved tip is positioned over the flame of the tin, whilst turning the walking-cane in gentle rotating movements.
Nowadays the “grooves” are darkened by means of a gas blow torch, which replaced the alcohol or petroleum burner. Other designs are obtained by using drills, hot irons and by inlaying the designs with brass.

Before applying varnish, the artisans dip the walking-canes in a liquid called aguada, made with water and dark ink dust. This process, besides covering the pores, gives the walking-canes a darker or lighter shade. The varnishes used in the final finishing process are also made by the artisans and applied in three layers.

Dog Head - Cobra Head
Imitation of the animals on the upper part of the crosier. Nowadays the artisan uses bone to inlay the eyes in replacement of ivory.

Metal Applications
The artisan uses brass to design figures or letters, which are fixed on the upper tip of the crosier.

Crutch – Stick – Half hand
Models without crosier handle. In the first model, the upper part of the walking-cane ends in a T-shaped handle, separated from the stem by a metal ring. In the last one, the longer part of the T of the crutch is adapted.

Spanish
Twig (not cut out) of the European nettle tree. It is usually decorated with lime designs and gouged over the varnish. 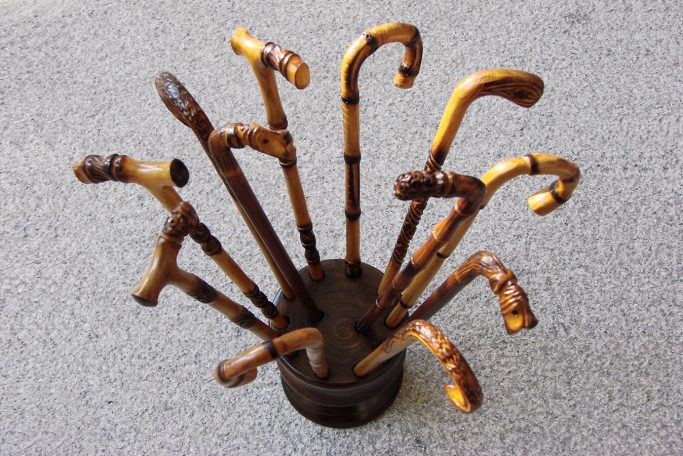 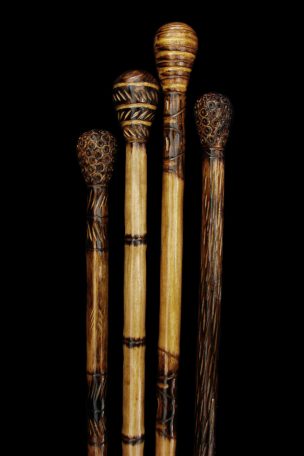 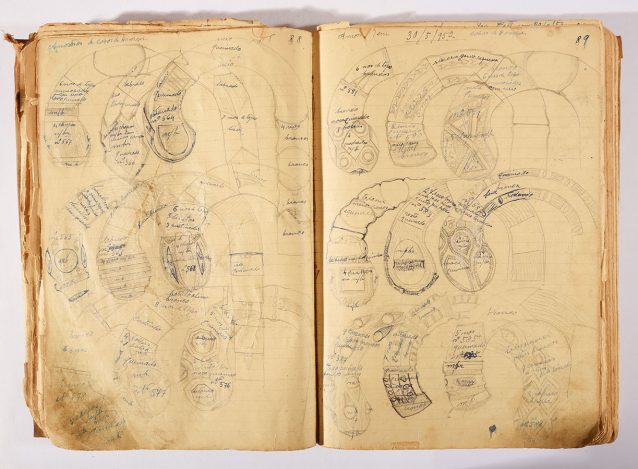 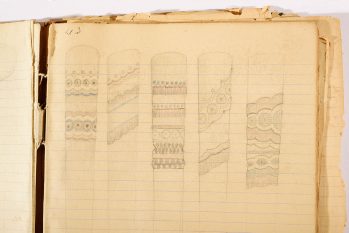 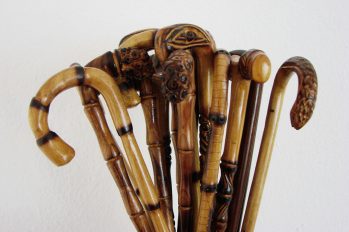 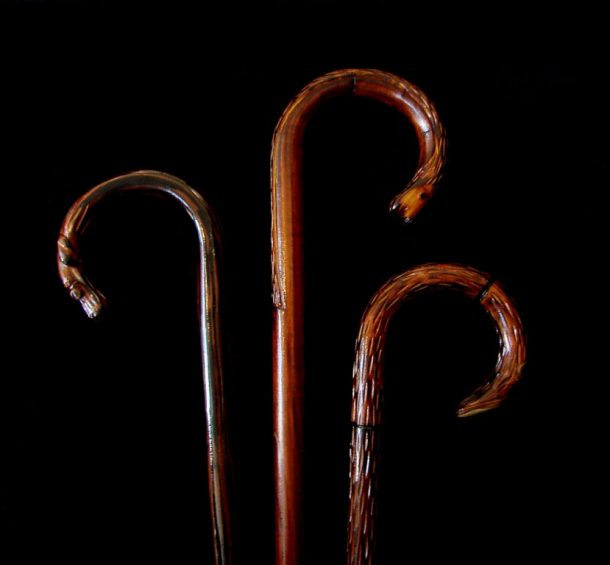 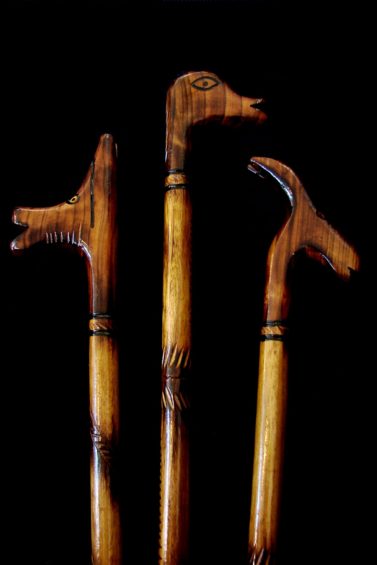 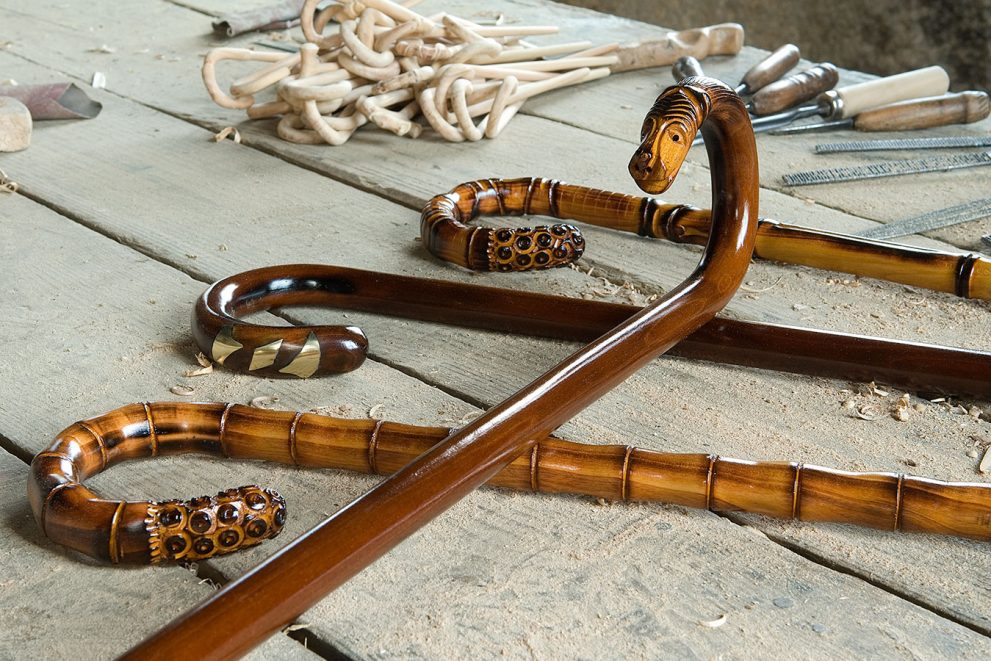 Harvested in the Serra do Montemuro (Resende, Cinfães and Castro Daire), ...
CRAFTSMANSHIP

Famous for the original folding technique and its decoration, ...