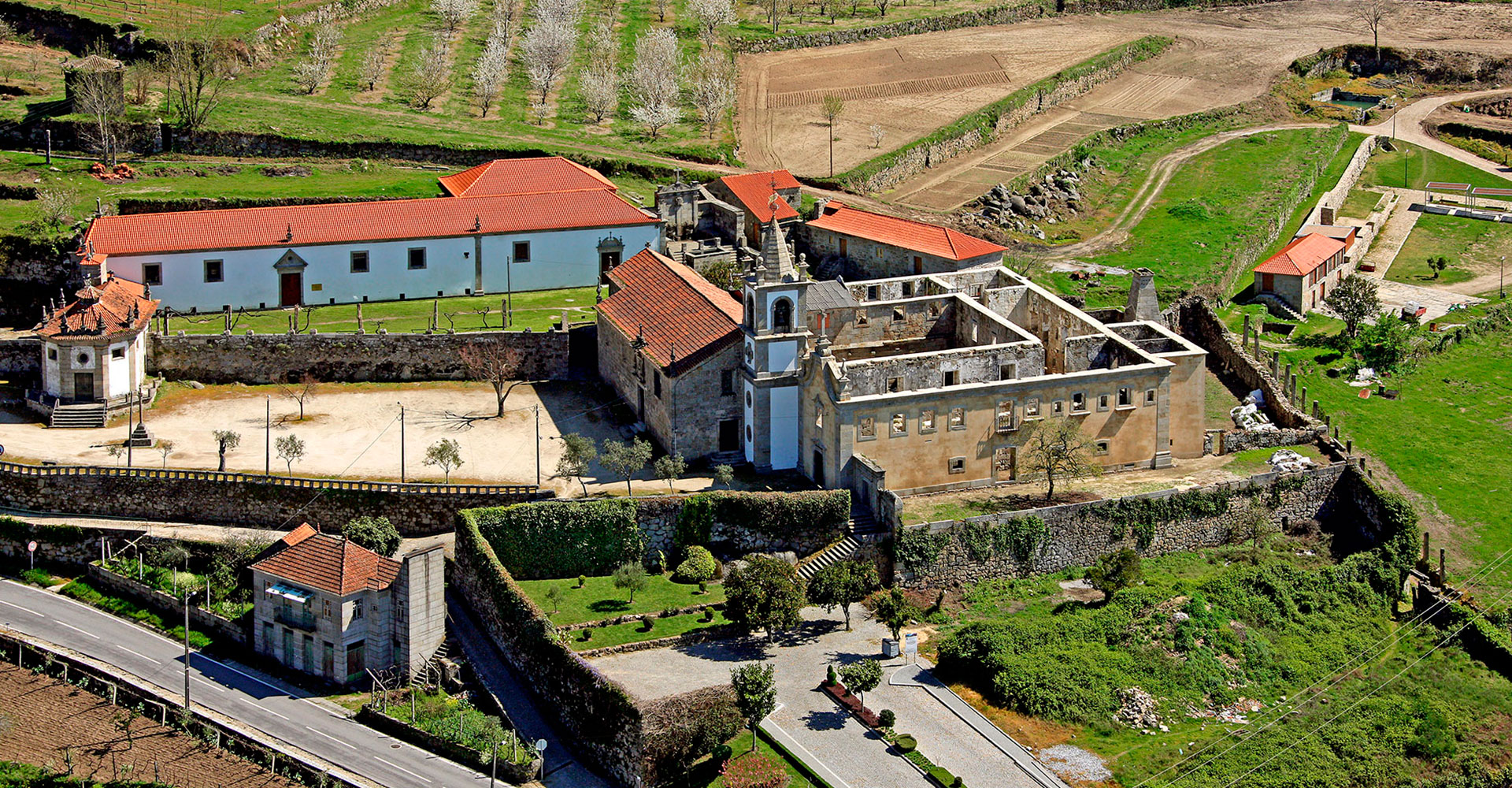 Although the date of establishment is unclear, it is known that in 1120 the Monastery was part of the Diocese of Oporto due to its relationship with the Religious Order “Cónegos Regrantes de Santo Agostinho”. In 1141, D. Afonso Henriques (Portugal’s first King) sold the Couto letter (granting immunity from royal authority) to an abbot of the Monastery for 150 morabitinos. In 1560, it was attached to the convent of “São Domingos de Lisboa” upon request of Pope Pius IV. In the 18th Century, various distinguishable structures were built forming today’s architectonical set: the barns, the wine cellar, the octagonal Chapel of Senhor do Bom Despacho and most likely the fountain. At the beginning of the 19th Century, the Monastery was sold to the First Barron of Ancede at a public auction.

From the twelfth century to the end of the fourteenth century

The first document referencing the Monastery of Sto. André de Ancede dates from 1120, having evidently been issued after the date of foundation reports on its affiliation with the Order “Cónegos Regrantes de Santo Agostinho”. In 1123, Calisto II makes the monastery part of Oporto’s diocese.

Today, of the early Monastery, only some walls and a rose window remain, with a thick torus on the outside, bordered by two small plinths and one pearled rim from the 8th Century (BARROCA, 1984, 129).

King Afonso Henriques bestowed the Couto letter (granting immunity to royal power) to the Monastery in 1141 for 150 moribitinos. The initial territory was of considerable dimension at a local level (approx. 16 km2), yet still far from the economic importance it would acquire during the later Early Medieval Period. This economic growth allowed for a systematic expansion of its territory, achieved through the acquisition and use of new properties, significant donations, bartering and leasing. The economic use of this heritage was firstly achieved through leasing and secondly, through a strategic commitment to trading wine at a larger scale, seeing as the wine business was one of the most profitable trades at the time. The properties were farmed by tenants, who were made to abide by somewhat strict agricultural contracts, imposing intensive cultivation of vines, techniques and even winemaking processes. The growing production of wine facilitated the integration of the Monastery of Ancede in the trade circuits of the Douro, mostly channelled to the city of Oporto.

The considerable profit from wine sales supported the trading process, as during the 1300s, the Monastery of Ancede benefited from its proximity to Oporto, freeing it from several obligations such as the requesting of permission to export wine, leaving 1/3 of the production for export in addition to the requirement to sell in the city. This short and long-distance trade justified the use of the urban buildings in the city of Oporto, such as the cellars and warehouses owned in Gaia and Oporto as well as the high-sided ships navigated by the seafarers of Oporto in the 15th Century and onwards. The leases and taxes were always paid in wine and not money. The production of wine as well as the services rendered by the tenants were passed on to larger properties (the so-called granjas, Portuguese for farms), such as Ermêlo or Quintela, which were equipped with specialised tools and facilities for production and storage of wine as well as other products (grain, fruit, olive oil, cattle, honey, game and fish products).

By the end of the Medieval Age, the economic growth of the monastery allowed for the landed property to extend from Baião to Mesão Frio, with extensions to Penaguião, Cárquere (Resende) and Lamego, also having properties in Trás-os-Montes, and above all in the Beira, in addition to the real estate previously mentioned in Gaia and Oporto, and several fisheries along the Douro river. The profits of the wine trade also allowed for various upgrades and embellishment works within the premises of the monastery. Others are said to have taken place due to the vicissitudes suffered, as was the case with the fire of 1355 that destroyed the dormitory and the houses around it, the refectory, the coat rack and the cloister. It is also known that in 1363 the repair works were not yet finished.

From the 15th Century onwards

In the second half of the 16th Century, the Monastery was going through a phase of decadence, perceivable through the reduced number of monks resided there and having its heritage managed by a clergyman. In 1560 as requested by Catherine of Austria, then regent of Portugal, Pope Pius IV published the bull that allows the annexation of the Monastery by the “São Domingos” convent in Lisbon. However, the Monastery continued to produce quality wine, which was to be sent by sea and delivered to its parent house in Lisbon (BARROS, 1998). It was in the 16th century that the spaces of the Monastery were embellished with several works of art. Notably the beautiful Flemish triptych by Joos van Cleve from 1530 (LORENA, 2016).

In the 17th Century, larger renovation works were carried out replacing the two churches that were part of the Monastery with a new building of three naves including three adorned chapels and a new choir, completed in 1689 (Book 3529, folio 43 verse and folio 44, from 1746). This description corresponds to the current layout of the church “Santo André de Ancede”. The parish church was made up of two naves, which presupposes more modest dimensions. The enclosure of the Convent probably also dates from the 17th Century in view of a reference made to the convent being already fully “enclosed by a wall” in a document dating from 1692 (Book 3529, folio 45, from 1746).

In the 18th Century, the now Convent of “Santo André de Ancede” must have continued living a period of economic expansion, as major remodelling works date from that time, such as the construction of the barns and the cellar (in 1722), the construction of the Chapel “Senhor do Bom Despacho” in 1731, and finally the North Gate in 1735, a Gate which closes the set and was built coupled to the walls of both the chapel and the Barn. However, the records on the church and the convent from around 1745, state that the tower threatened to collapse because it was partially demolished. The west wing of the Monastery is considered to be very old, it already existed when the Order “Cónegos de Santo Agostinho” were still there and where a library and six other cells were located.

The south wing is already referred to as the new wing, on the lower floor it houses the “profundiz” hall, the refectory and the storage from east to west. On the upper floor, there was a barber room and three other cells, one of which lodged the “prosecuting priests”. In the east wing is the chapter house, the cell of the attorneys general and two other cells. The same document describes the enclosed cloister surrounded by a “a shed” all around, with the exception of the north side (church), supported by stone columns. The pavement is described as being made of soil with tombs next to the sacristy and the church.

The “Casa da Hospedaria” and the “Casa dos Moços” correspond, broadly, to the building which was formerly used as a house for the caretakers. In the 18th Century, it was a larger building as later evidenced by excavations carried out in 2005 in which an outer limit was found to be located south of the current outer wall. Next to this house, towards east by the fountain, was a building housing the wine press and oven, with porches closing off the patio.

As result of the eviction of the religious orders in Portugal during the 1st half of the 19th Century, the convent was sold at a public auction to the First Baron of Ancede, who builds a girls-only school there. His family crest is still visible on the front of the north gate. As the Church and the Chapel were left out of the sales process, they were returned to the Parish in 1932.

Some reflections on the Ancede Architectural Complex

In the article quoted by Amândio Barros we can infer that there were several works and improvements that this Monastery/Convent has undergone over the two centuries that this historian has looked into. However, the architectonic history of this important building and all the annexed structures still requires further explanation. The Church’s exterior seems to be part of the architectural style known as the “Estilo Chão”, characterized by the lack of decorative detail, by quadrangular volumetry and by the sobriety of geometric rigor which goes hand in hand with styles of classic taste, such as Renaissance, Mannerism and later Neoclassicism. This style has manifested itself in Portugal since the end of the 16th century and lasted until the 17th century.

The barns, the fountain and the north gate seem to be inserted into the same architectural style despite being more recent. This could mean that there was a continuation of this style in the early years of the 18th century. The effort to maintain the symmetry of the facade in the large building of the barns is also noteworthy. This symmetry was achieved by placing pilasters, regardless of the internal division of the building. The barns present the date of 1722, the octagonally shaped “Senhor do Bom Despacho” Chapel dates back to 1731 and the gate, closing off this architectural complex, attached to both the chapel and the large building, that used to function as a warehouse, bears the date of 1735 and the family crest of the first Baron of Ancede. The exterior sobriety of the octagonal Chapel contrasts starkly with the decoration of its interior, where the Baroque style predominates.

Although the Gate was built shortly after the Barns, being attached to the outside wall of the facade of that building disturbs its interpretation as it disrupts the symmetry and the geometric rigour of its construction. With all of this in mind, we believe this style was still predominant in Ancede in the early 18th Century, more particularly in the decoration of the facades, maintaining the same type of pinnacles, pilasters and volutes that in turn also characterizes the Church of Ancede, which was concluded in 1689.

Judging not only by its decoration, but also by the place it was built on, the fountain must date from the same period. All of these buildings, the barns, the wine cellar, the fountain and the chapel were certainly part of a full-scale project, in account of the requirement to section the terrain and to an excavation to the east. At the same time, the excavation grounded the level between this set of buildings and the much lower-level Church and east wing of the Monastery. This grounding required the construction of a supporting wall by the east wing, which covers the windows of the current sacristy of the Church.

The Senhor do Bom Despacho Chapel, located on the same level as the Church, was then built adjacent to this supporting wall.
BIBLIOGRAPHY: 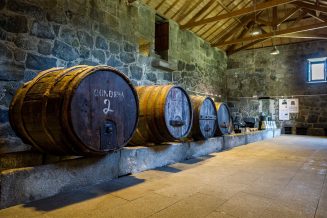 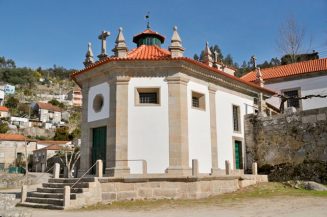 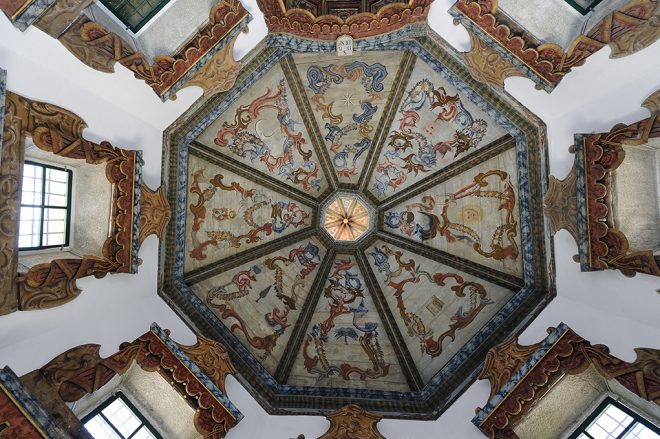 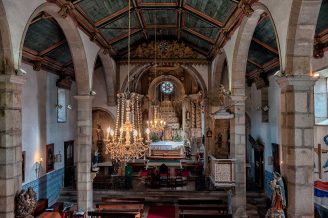 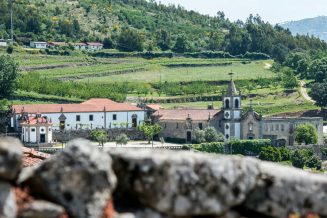 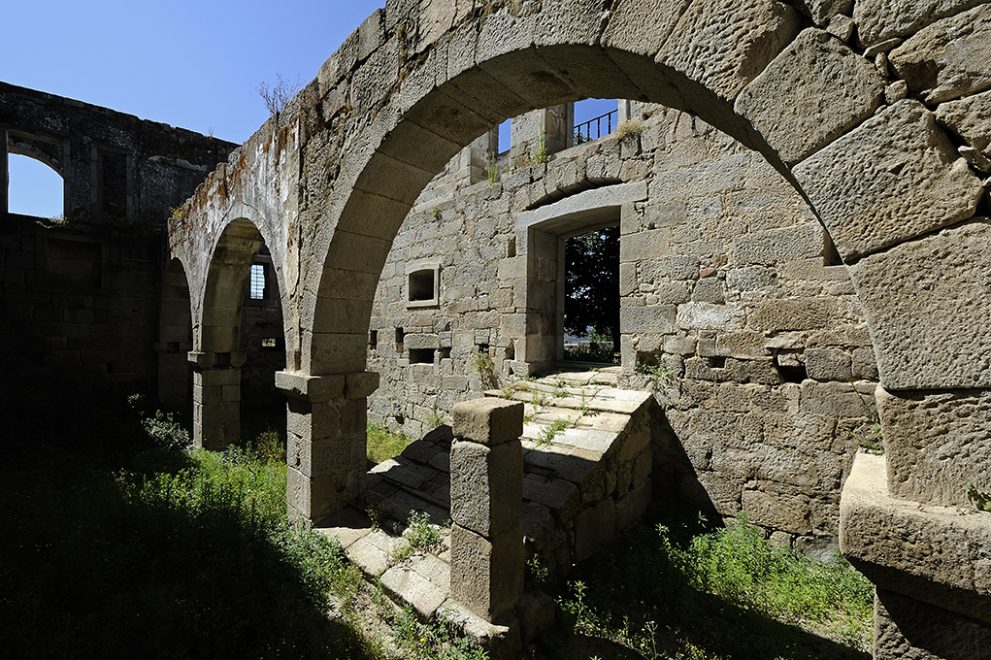