A humble temple with a longitudinal layout, a main chapel that is lower and narrower, made up of only one nave. It is presumed that the church was built during the final years of the 18th Century, some marks left by stonemasons are still visible and the masonry seems to belong to an older construction from 1188 as proven by the inverted inscription found in the north wall of the main chapel.

The Roman calendar (era of 1226) is used in the inscriptions, and to know the corresponding date, 38 years are subtracted from the same date on today’s calendar. Above the inscription, there still is a horizontal stonemason’s mark in the shape of a crosier.

The masonries used in the construction of the church has different shapes and sizes, resulting in an inconsistent look and various initials can be seen on the temple’s inside and outside walls. Decorative elements are only seen in a few parts, namely the main chapel and in the nave’s north and main entrance. The Dog figurines on the north facade are noteworthy for their traditional Roman decoration that uses geometric designs (rolls and spheres) and the “anthropomorphic” figurative elements. On the main facade, two lateral figurines of a hare and a rabbit are seen by the wall. The main facade has a broken arch with two archivolts, the interior one displays a pearled rim above the chamfer, which can also be seen in the cornices. Thus, Valadares’s church can be described as belonging to the so called “românico de resistência” or “ gótico rural” (“resistance Romanesque” or “Rural Gothic”).

What makes this church special and exceptional as part of the Patrimony is the 15th century fresco paintings on the back and lateral walls of the main Chapel, “hidden” behind the main altarpiece.

On the back wall, the painting is split into various framed panels. Next to the left side of the nave, Saint Catherine of Alexandria can be identified due to the sprocket and the sword in her left hand, threatening the head of a tyrant by her feet. This is followed by a representation of the Entombment of Christ and, immediately after, Saint James as a pilgrim carrying a pointed cane on his right hand and a book on his left hand. On the side of the Epistle, Saint Barbara is portrayed with a book on her left hand and a grey tower to the right side.

These four panels are headed by a frieze of angels, which could represent heaven and at the centre there is a small alcove depicting Mary with a boy on her lap. At the top of this frieze there is another one with interchanged stripes in red and white, overlaid with an imitation of tapestries. On the side of the Epistle, we see Saint Paul, holding a sword on his right hand and a book on his left hand. Above, is a painting of Saint Peter holding a key on his right hand and also holding a book on his left hand.

On the left side of the nave, there is a representation of Hell flooding with bizarre creatures, such as an unusual black bird with a rooster head and a goose beak, a two-headed figure with two horns and a creature with a human body and the head of a dog. Above, a large animal head is swallowing some characters. Finally, still on the back-left wall of the nave, part of an inscription can still be seen today, revealing who ordered the mural paining and its date: [man]dou fazer juan camel […] abade desta ygreja: era de mil cccct, […] ([ord]ered by juan camel […] abbot of this church: from thousand cccct, […]). It could be referring to João Camelo de Sousa, son of Álvares Gonçalves Camelo and brother of Luís Alvares de Soura, both Lords in Baião.

The medieval church underwent various changes during the modern era, today it keeps the baroque altarpieces and it was added a baroque sculpture of the peregrine Saint James on the main altarpiece and the painted images on the ceiling of the nave and on the cross arch of Saint James, the “Mata Mouros” (moor-slayer). 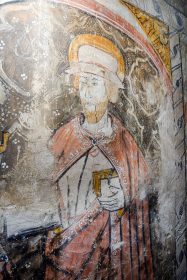 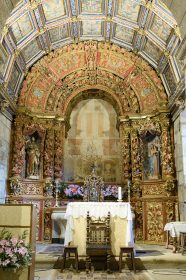 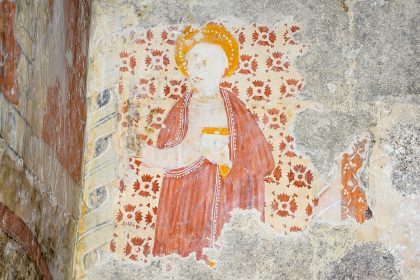 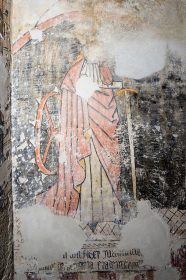 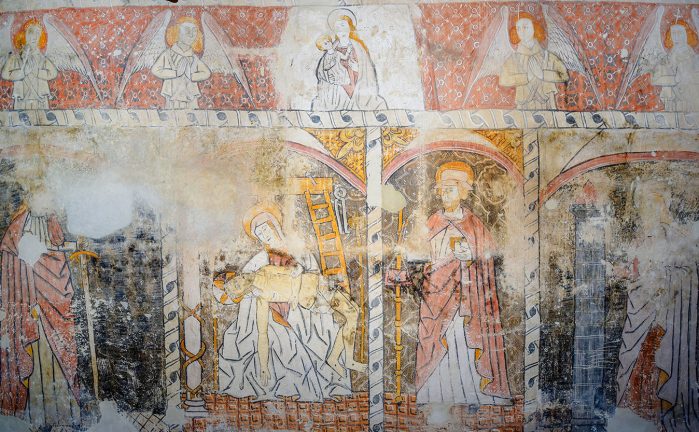 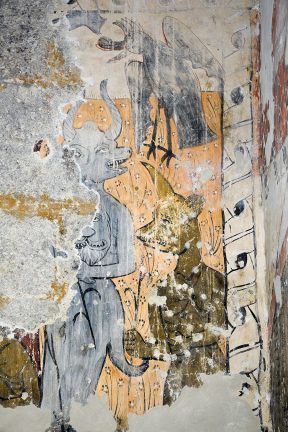 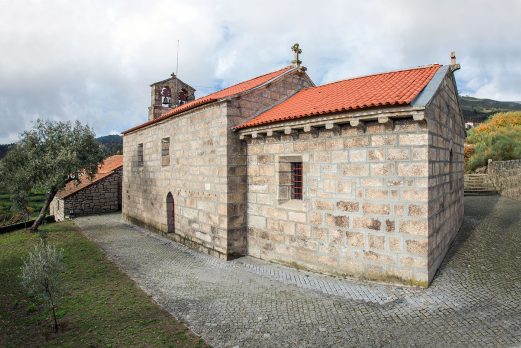 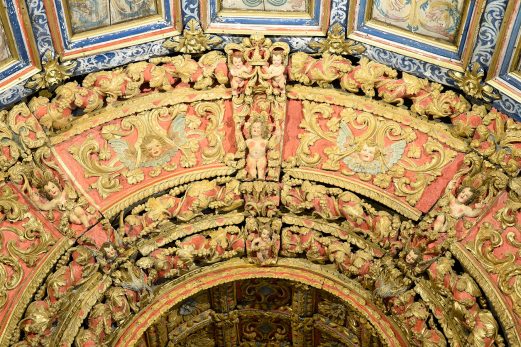 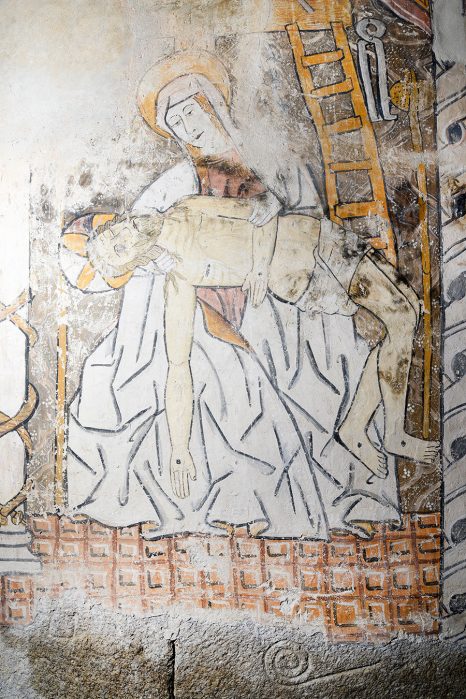 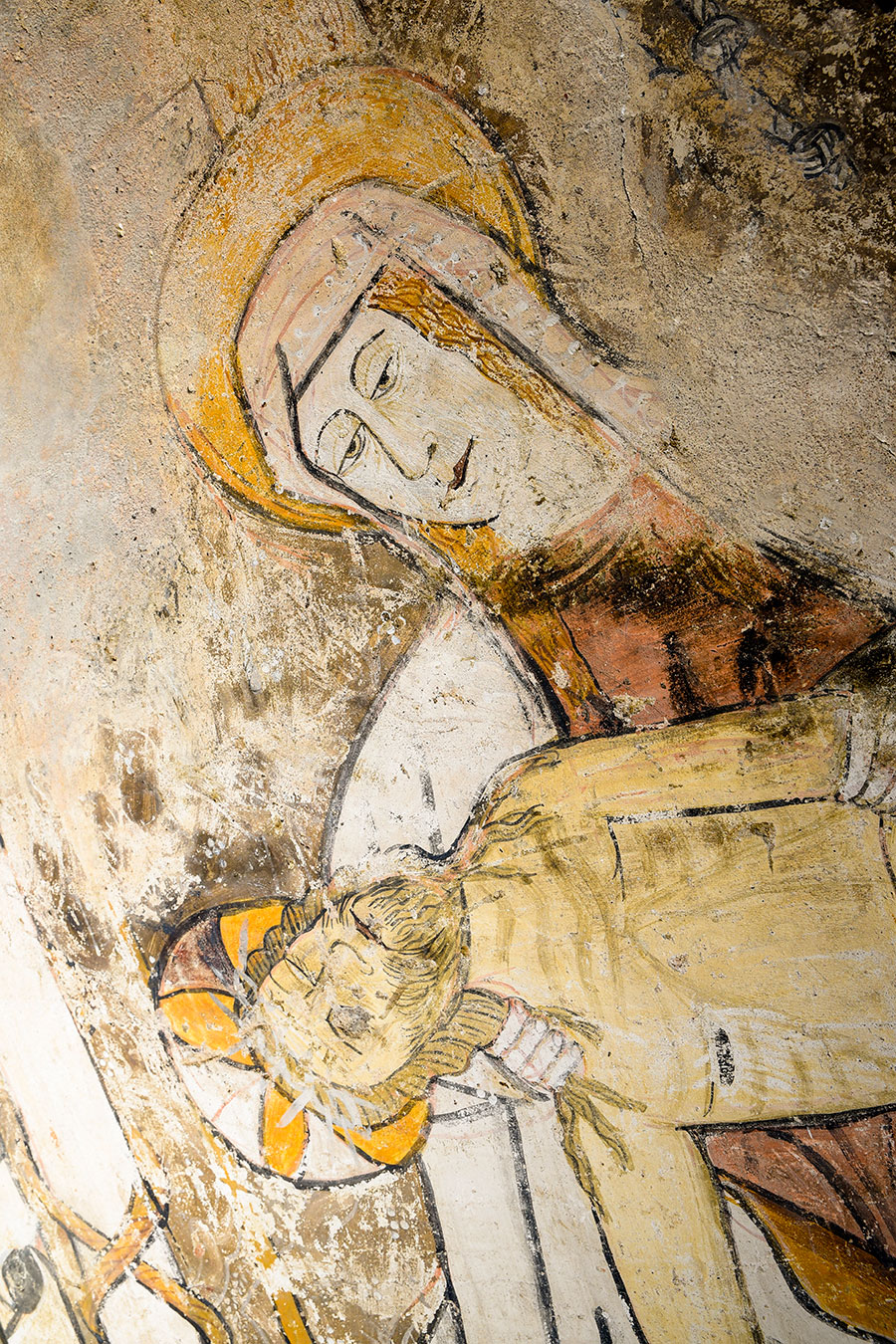