Chapel of the Senhor do Bom Despacho

The Chapel Senhor do Bom Despacho is part of the Monastery Santo André of Ancede. It was built in the first half of the 18th Century. The octagonal layout and the baroque style of its interior is a reflection of an architectural style popular at the time, as evidenced by the polychrome woodcarving and gilded carved wood. By the second half of the 16th Century, the monastery Santo André de Ancede belonged to the Convent São Domingos in Lisbon, the sculpture and pictorial decoration of the chapel is evidence of that.

The decoration focus on Rosary themes, clearly expressed in the various roses painted around the altarpieces and especially in the painted canvas of the main altar, where we see Virgin Mary handing the rosary to Saint Dominic, who uses it to convert heretics to Catholicism. The same canvas depicts Saint Dominic handing that same rosary to another Dominican friar. The background depicts the purgatory in flames, while several characters representing different social backgrounds stretch out their hands asking for salvation.

All sculptures of the altarpieces portray the Mysteries of the Rosary in a three-dimensional and theatrical manner, making it seem like an actual theatre play. The sculptures are placed like actors in a play, framed on stage by painted backgrounds and sculptured curtains. The main characters connected to Christ are always sculptured in gilded woodcarving whilst the secondary characters, are only polychromed.

The octagonal nave exhibits a set of six altars representing the Joyful Mysteries and the early life of Christ. Portraying the following: Annunciation, Visitation, Nativity, Circumcision, The Biblical Magi and the Presentation of Christ at the temple.

On the Ceiling of the nave are represented Marian symbols, such as the tower, the cedar tree, the palm tree, the mirror, the sun, the moon and the Dominican coat of arms.

The Sorrowful and Glorious Mysteries are depicted in the main altar. The ceiling is ornamented with symbols of the Passion of Christ.
The altarpieces representing the Sorrowful Mysteries were certainly created at a later stage, as the main altarpiece was roughly sawn for the purpose of covering the bases of the main columns. The Sorrowful Mysteries are represented in the six panels below the Crucified Christ. These panels depict the Agony in the garden, the Betrayal of Judas, holding a bag with presumably 30 silvers, The Scourging at the Pillar, The Crowning with Thorns, The Carrying of the Cross as the moment of the Passion of Christ (crying women, Christ carrying the Cross and Marie Magdalene), and finally Christ on the holy sepulchre, Death of Our Lord, represented in a single piece of terracotta of great sculptural beauty.

On the wall to the left of the main altar we see an altarpiece representing the Resurrection of Christ, while “guarded” by the Roman soldiers and to the right, we see an altarpiece representing the Ascension of Christ in the presence of his three main apostles: Peter, James and John. In the upper part of the main altar, we see depictions of the Divine Trinity, the Assumption of Mary, The Coronation of the Virgin and to top it all, on the headliner there is a small cartouche symbolising the Pentecosts/ Descent of the Holy Spirit.

Behind the main altarpiece there were other sculptures, the only one remaining is representing the Calvary in terracotta. A few years ago, it was found some remains of mural paintings. 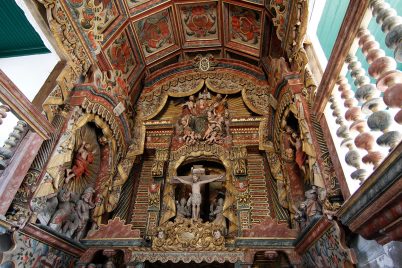 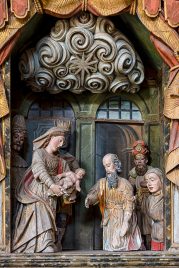 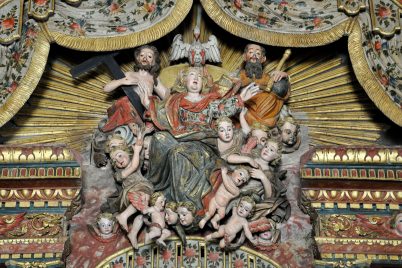 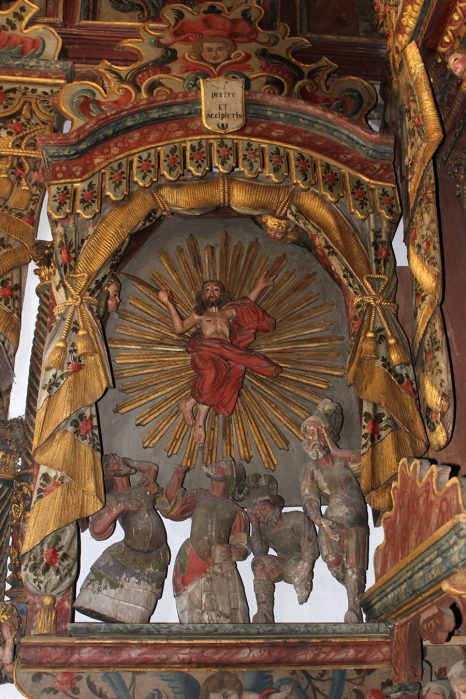 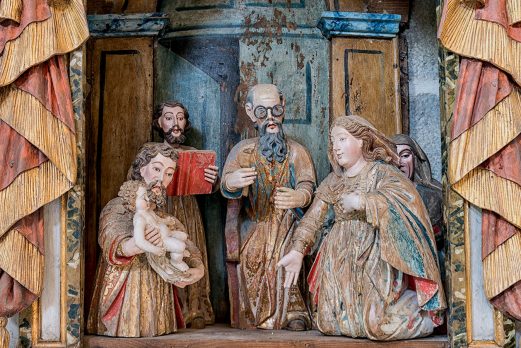 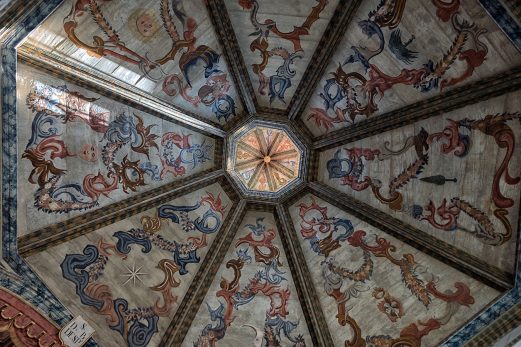