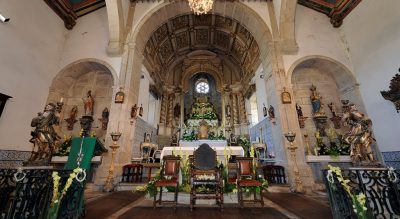 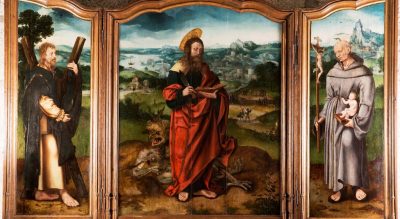 The Mother Church of Ancede was also the Church of the Monastery of St. Andrew of Ancede, built at the beginning of the twelfth century, being the first known documentary reference dated from 1120.

We know that during the medieval period there were two churches, one for the canons of St. Augustine and one for the patrons, and both of them small. At Christmas of 1689 a church of 3 naves is inaugurated already very similar to the present mother church.

It is known the commercial relations that this monastery of Ancede had with the region of Flanders from the XV century to where it exported wine through a ship of high board. It is not surprising, therefore, that we have today in the Church several paintings identified as paintings by Flemish authors, especially the beautiful triptych of Saint Bartholomew of Jos van Cleeve in 1530.

It is worth appreciating and learning about the sculptures kept in the Church, a Gothic parochial cross and a holy skull, which is said to have cured the people and cattle suffering from rabies.